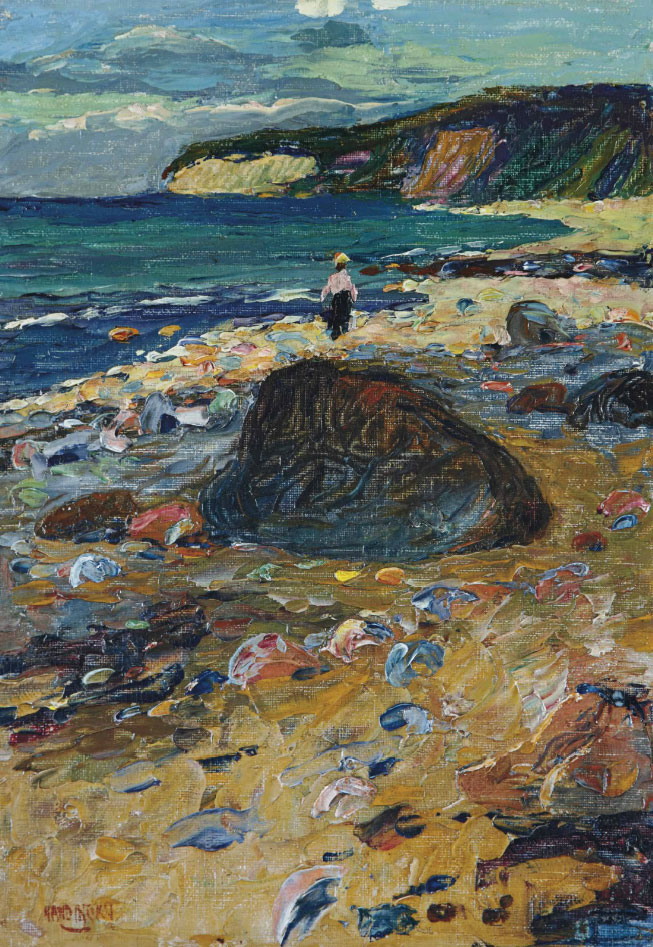 Binz on Rugen is a rare early painting by Kandinsky created during his apprenticeship period. It embodies his experiments with technique as well as thoughtful study of colour which is going to show itself in full force in a few years. The artist created several paintings on picturesque beaches of Rugen, an island in the Baltic Sea. This period can be regarded as the artist’s early maturity when he is still strongly influenced by neo-impressionistic techniques but already starts feeling his own way.

His works created in 1901 are mainly small plein air oil paintings. They are obviously strongly influenced by Monet in terms of dealing with light and evince stylistic parallels with Signac’s technique. Impasto* is so intense in these paintings that they are almost overloaded with colour. In this particular picture the use of a palette knife** for applying paint fills it with expressiveness of colour which in its directness and simplicity almost ruins the composition revealing the artist’s tending toward abstraction.

Kandinsky visited Binz in summer 1901 and painted four pictures in a similar technique there. One of them is in Centre Georges Pompidou in Paris, another is in Belgrade.

*impasto (pastose technique) is an oil painting technique of applying paint in thick brushstrokes providing texture and expression.
**palette knife is a special artist’s tool for handling paints which looks like a knife or a small trowel. Poster for the First "Phalanx" Exhibition "Each period of a civilisation creates an art that is specific in it and which we will never see reborn. To try and revive the principles of art of past centuries can lead only to the production of stillborn works."
all quotes